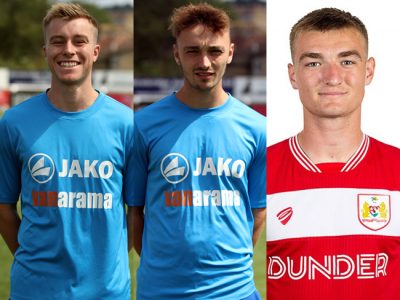 With the new season just days away, Jerry has made some final adjustments to his squad in readiness for the contest to begin in earnest.

James Ollis has signed on loan for Southern League Premier new boys, Yate Town, until the New Year. This continues James’s progression, having played for Western League Keynsham Town and Southern League Division One South Mangotsfield United in his first season in senior football. We will watch his progress with interest and wish him well.

Joining permanently after a successful pre-season is 20-year old midfielder, Tom Richards, who has been part of Bristol City U23 development squad and spent time on loan at Truro City last season. Tom is another player to make the move from Ashton Gate to Twerton Park in recent years, following in the steps of Dan Ball and Jack Batten.

Following the injury to Jack Batten last Saturday, we have been assisted by Bristol City in agreeing to loan us central defender, Harvey Smith, for a month. 20-year old, Harvey had an extended loan with National League North side Hereford last season, so knows the level, and is a player Jerry is familiar with having monitored Bristol City U23’s for the last few years. We thank Lee Johnson and Brian Tinnion at Bristol City for enabling this loan to go through.