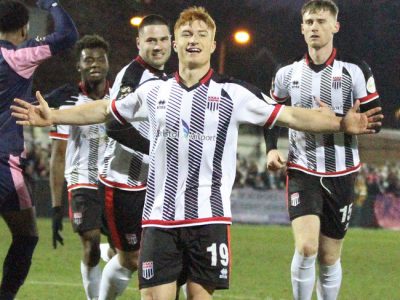 As the players return for pre-season training, we are delighted to announce a further addition to the squad with the capture of Tom Smith’s signature, following his release by Cheltenham Town. Tom, who turned 21 earlier this year, needs no introduction to supporters, having already made 58 appearances in three loan spells and scoring 18 goals for the City. We look forward to welcoming Tom back to Twerton once again.

With the signing completed Jerry said:

“I am so pleased to secure Tom’s services as a Bath City player. As you are all aware, I have worked with Tom over the last couple of seasons as a loan player and he has become a huge part of what we are building at the football club in his three separate spells with us.”

“He comes with a hunger and desire to be successful with us and another player with a long term goal of returning to the EFL. I have worked tirelessly in trying to get this deal over the line since the end of last season. Having had a further year left on his contract at Cheltenham Town it shows not only his ambition and commitment to us but a sign from us as a club that we can now attract this type of player and be able to sign him on a permanent basis on a 2 year contract.”

“Tom is a player that now knows the level very well and I am sure will be a huge success for us in what is now a very competitive squad.”