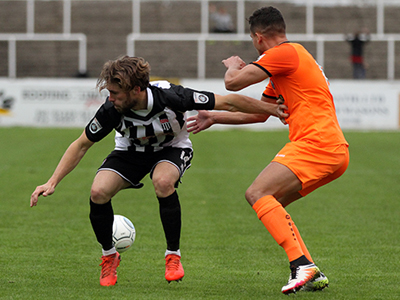 City held Vanarama National League South leaders Braintree Town to a 1-1 draw at Twerton Park in a game that saw another penalty miss for the Romans and a stoppage time red card for goalscorer George Rigg. The visitors produced little to justify their lofty position in the opening exchanges, with City enjoying the majority of possession and fashioning a number of promising positions without really testing keeper McDonald. As the half progressed the Iron’s approach of sitting deep and trying to catch City on the break began to threaten, Oliyide slipping as he lined up a shot then forcing Luke Southwood into a smart save down low to his left. The second half was equally low-key until, on 57 minutes, Nat Jarvis went to ground as a Watkins cross flew across goal. There were little in the way of protests but the referee pointed to the spot. Jarvis took responsibility only to see his effort deflect off the keeper, up onto the underside of the bar and away to safety. Despite this blow City produced their best spell of the game after this, Watkins shooting across goal and Tom Smith’s well-struck shot almost deceiving McDonald. City should have had another penalty when a defender blocked Anthony’s Straker’s cross with his arm but Braintree’s luck finally ran out with 11 minutes left when Rigg’s effort from 25-yards hit Crook before looping up and over McDonald. However, City were denied a deserved win with five minutes left when a low cross was neatly diverted into the net by Oliyide. Both sides went in search of a winner after this, City remarkably seeing a much clearer push on Jarvis in the box ignored by the referee and Southwood saving well from Okoye’s header. In-between, Rigg received a second booking to see an early bath but it was City who almost won it with the last attack, Marvin Morgan driving into the box but getting crowded out before he could get a clean shot away.