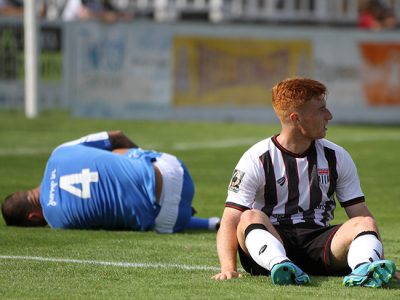 City maintained their unbeaten start to the 2019-20 season but endured a frustrating Twerton Park afternoon as they were held to a goalless draw by Tonbridge Angels. Tyler Harvey’s second half penalty miss was City’s best chance to claim the deserved three points but they also had good fortune moments before when Harvey Smith escaped a second booking in an apparent case of mistaken identity. City started the game well, with a couple of early chances, but the visitors tactic of slowing the game down whenever possible soon took the sting out of City’s attacking efforts. Ross Stearn had the ball in the net but not before the linesman had flagged for offside before Harvey forced a smart stop from keeper Roberts – whose booking for time-wasting just before the break summed up his team’s approach – and it was no surprise the game was still goalless at half-time. The opening exchanges to the second half were even more disjointed as City introduced Ryan Brunt and looked to get the ball forward quicker. Tonbridge had begun to test City with several quick breaks and one such attack just past the hour saw Harvey Smith deny Derry a run on goal. Having been booked a few minutes earlier it looked like the end of the afternoon for Smith but instead the referee showed Alex Hartridge yellow and City kept eleven men on the pitch. And when seven minutes later Connor Riley-Lowe’s high ball into the box saw Brunt pulled to the ground by Derry, City were given the perfect chance to take advantage of this good luck. However, Harvey blazed the spot-kick over the bar. City continued to press for a winning goal in the latter stages of the game but Tonbridge’s defence stood firm and they nearly grabbed an unlikely winner in stoppage time, a swift break seeing Ryan Clarke save well from McKenzie’s shot.