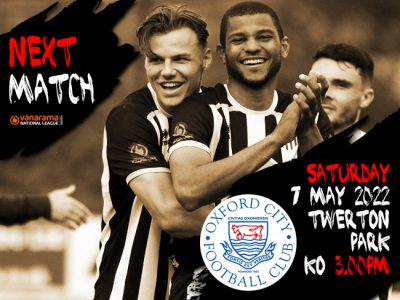 The curtain comes down on the league season this Saturday when we welcome Oxford City to Twerton Park. While the recent wins against Hungerford, Billericay and Tonbridge ensured that we will stage National League South matches again next term, it has yet to be decided if The Hoops will be amongst our opponents.

They presently sit in 5th position and are guaranteed a place in the playoffs while wins against Concord and St Albans over the bank holiday weekend ensured they have home advantage in next week’s eliminator matches.

Jerry Gill will undoubtedly be expecting his players to end the season with a win and finish as high as a possible 15th place but there is also the memory of what happened when we visited Marsh Lane back on August Bank Holiday Monday to add motivation.

In what was one of the most impressive displays by an opposing team this season, Oxford swept City away in a crushing 5-1 victory. And that was after the visitors took a first half lead courtesy of an Elliot Frear goal. The second half was one way traffic, especially after Eddie Jones received a second yellow card, and perhaps served up a warning of a season of struggle.

Although he was not on the score sheet that day the City defence will need to keep a close eye on top scorer Joe Iaciofano who has bagged 21 league goals this season. And with the third best defence in the division facing them it will be a good test of our attack following six goals in the last three fixtures.

This will be the first visit to Twerton by The Hoops since August 2019 when a Tom Smith goal could not prevent a 2-1 defeat for City. That was the third win for the visitors while we have picked up two wins in the five league matches staged since the first in 2015.

Oxford’s away form this season has seen them secure nine wins and they were in fact unbeaten on the road until the first match of February! However, defeats at Dorking, Maidstone and Ebbsfleet suggest that if they reach the playoffs final they may have their work cut out if it’s away from Marsh Lane.

City enter the match with ten points out of a possible twelve and the opportunity to send their loyal supporters home with renewed optimism for next season.

And those supporters are being rewarded with a Buy One Get One Free offer if tickets are bought online. The same thank you gesture applies to season ticket holders.