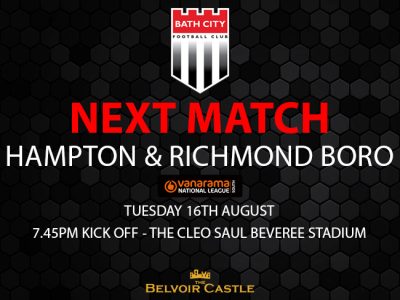 City will be aiming to build on Saturday’s incredible win against Eastbourne when they travel to south west London on Tuesday evening to face Hampton & Richmond Borough.

The Beavers have collected just one point from their opening two matches, with newly promoted Cheshunt clawing back a two goal deficit with three in the last fifteen minutes before Hemel secured a 1-1 draw at the Beveree on Saturday.

Last season Hampton finished in 11th, which would have felt disappointing after the Middlesex club reached November having only lost three league games. But the winter months saw them pick up just eight points from December to the end of February – three of those in a home win against City.

Saturday’s great win for the Romans will offer great encouragement to players and supporters as the ground does not hold great memories. Since our first visit in 2008 there has been just the one victory in nine fixtures, courtesy of a Sean Rigg goal three seasons ago. Due to its small size and great fan support, there is usually a good atmosphere with the locals providing a friendly welcome.

There is plenty of information for visiting supporters, including admission prices on the Hampton website.

As well as the clubhouse, there are several pubs within a short walk of the ground and this is probably the best club we visit for things to do in the neighbourhood. If you get there early enough you can enjoy a walk along the nearby River Thames path or the delightful Bushy Park, beyond which is Hampton Court Palace.

Unfortunately there will not be a Supporters Club coach running to the match and whilst using the train is just about doable there is a replacement coach service from Swindon so you won’t get back to Bath until the early hours. Therefore the best bet is probably to drive, with the 115 mile trip from Bath taking around 2.5 hours.

But if you’re unable to make it you can follow all of the action with live commentary provided by Bath City Radio.