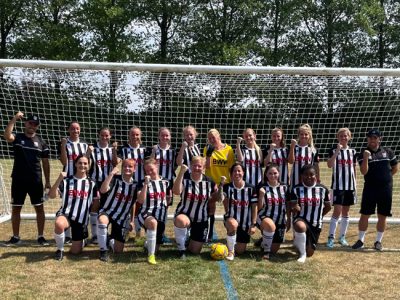 Bath City Women walked out on a boiling Sunday morning yesterday for their inaugural fixture against Downend Flyers, preparing for a season in which they’ll make history by playing their home fixtures at Twerton Park. As the match got underway, the team visibly started to gel more and more throughout. The opening goal, however, came following a high ball finding its way to a striker who converted for the opponents.

Bath responded well, Tanea Wright slotting a great pass to Liv Davies who penetrated the Flyers defence and won a penalty. Beth Edwards stepped up to expertly place it into the bottom right corner to level things.

Shortly after the drinks break restart it was Bath who got the second. Ali Diegutis finishing a good routine off, though the Flyers restored parity with a tidy rebound in the ensuing minutes.

The sides resumed for the second half in an open but tight encounter. Bath crossed the ball in but the keeper got a hand to it. It struck Annie Hervey, who played an excellent match, giving Bath a 3-2 advantage. Bath upped the ante and took charge,  Hervey reacted brilliantly to a great pass forward to sweep the ball in on the half-volley for 4-2 and bagging her brace.

Downend re-emerged from the final drinks break with a vengeance, scoring twice in quick succession, the first was poacher’s goal in the six-yard box. This galvanised them and when they equalised through a long-distance chip, the comeback was all but complete. But the Romans kept their cool and got back to their game plan, gaining a free-kick around 30 yards out with Paige Owen lining up to take it. The ball arrowed to perfection into the top left-hand corner for an amazing winner. A side that, prior to the match had only had six training sessions to get to know each other and the playing style, performed exceptionally in their opening match. Twerton Park awaits.