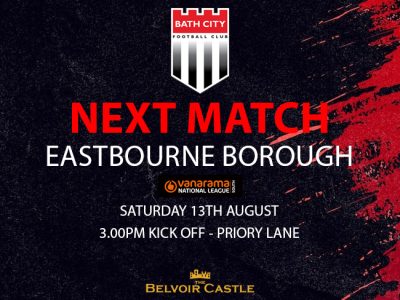 City make their first away trip of the season this Saturday when they head to Eastbourne Borough looking to open their account for the new campaign. Despite conceding the three points to Dartford on the opening day, City will travel with optimism having largely gone toe-to-toe with their fancied visitors at Twerton Park.

Eastbourne finished in 6th place back in May to earn a place in the play-offs eliminator match but were defeated 2-0 at Oxford City. As luck would have it the Sports returned to the same venue for this season’s opener and exacted some revenge with a 3-1 victory.

Last season we exchanged victories with Eastbourne with an Alex Fletcher goal securing home points in January before the Sports ran out 2-1 victors in the return fixture during a rich run of form. The first goal was converted by top scorer Charley Kendall who finished off a superb 17 pass move but City won’t have him to contend with on Saturday as he moved on to Lincoln City during the summer.

Although it will be difficult to replace Kendall it is possibly the defence which manager Danny Bloor has been looking to improve the most. The 67 in the goals against column was only one less than relegated Billericay conceded and perhaps explains why the Sports had such a disappointing end to the season, gaining just two points from the final six matches, the last of which saw Dartford win 7-2 at Priory Lane.

City have visited Priory Lane on eleven occasions since 2003 and only suffered four defeats in that time. Ten points have been secured from the last five meetings, the most recent being a 2-1 win on the 3G surface on the Saturday before Christmas 2019 with an incredible late fightback inspired by a moment of magic from Tom Smith.

Priory Lane is a neat ground located in the outskirts of Eastbourne but its elevated position means it can get a little fresh with the sea breezes, although that might be very welcome on Saturday with temperatures expected to reach 31 degrees!

While there are no pubs of note in the surrounding area, the large, comfortable clubhouse is one of the best in this league.

Eastbourne makes a fine base for those supporters making a weekend of it, with a scenic walk to Beachy Head and a stroll around the Marina amongst the many attractions.

The 180 mile trip by road from Bath will take around four hours as will the train journey but the latter looks out of the question due to rail strikes on Saturday. This is the only match of the first two months of the season which the Supporters Club does not plan to run a coach to.

So if you cannot get to Priory Lane do remember to follow all of the action with live commentary from Bath City Internet Radio.