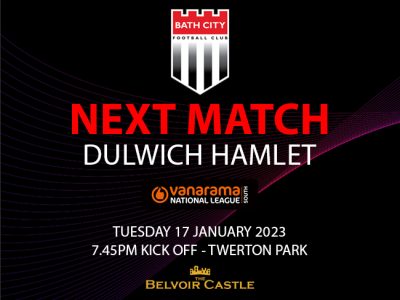 City will be hoping to bounce back from Saturday’s disappointing result at Bracknell when they welcome Dulwich Hamlet to Twerton Park on Tuesday evening. This of course is the second time the two clubs will have attempted to play this fixture, after the first in early November was abandoned following the horrific injury suffered by Alex Fletcher.

Up until then, the south London club were having an indifferent season and languished in 18th place, which was a far cry from last season when an excellent first half made them a good tip for the title. Although the season tailed away, a final position of tenth was their highest for just over two decades.

Since that terrible evening in November, things have picked up for Paul Barnes’ team and in the eight matches since, 14 points have been collected. This has moved Hamlet up to 15th, four points behind City. Four of their away wins have come in the recent trips to Dover and Welling.

The latter was on Saturday by a 4-2 score line in what was described as a blood and thunder affair, with the visitors winning it with two goals in the last minute. However, that made it a total of six goals conceded in their last two outings and there have only been two clean sheets in their 23 matches.

Top scorer with nine goals is Danny Mills, who has netted a total of ten against City for five different clubs and will be one to watch carefully on Tuesday.

Last season’s encounter at Twerton between the two clubs was played in April and ended goalless, which considering Jack Batten’s 15th minute red card, was seen as a point gained rather than two lost in our fight against relegation. But with goals at both ends of the pitch in nearly all of Hamlet’s games so far, such a score line looks unlikely this time.

This will be the sixth meeting between the two clubs at Twerton since 1980 when City’s FA Trophy dreams were dashed in a 3-1 defeat. We had to wait 38 years to settle that score with two wins in consecutive seasons, the second courtesy of a Tom Smith hat trick in 2020.

A reminder that entry is free for this rearranged match.