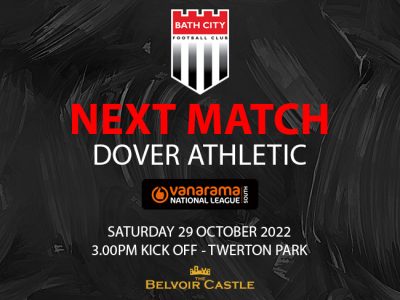 Just three days after their impressive performance at Havant & Waterlooville, City return to action on Saturday when they welcome old rivals Dover Athletic to Twerton Park. Having suffered only two defeats in their last twelve league games, they will be aiming to take full advantage of this and the visit of Chelmsford on Tuesday to cement their place in the play-off positions.

Their visitors from Kent lie in 13th position on 18 points having failed to take full advantage of four consecutive matches at their Crabble ground when they only drew with Farnborough on Saturday and then suffered a shock 3-0 reverse to strugglers Concord in midweek. Before this defeat, The Whites had been on an unbeaten run of five matches which made up for their slow start, but away from home they have only tasted victory at Weymouth. And they chose the short straw in the FA Cup when the draw sent them to Ebbsfleet and a predictable defeat.

Of course Dover have returned to National League South after spending eight seasons at the top level. When the league handed a twelve-point deduction out to them last season, it was inevitable they would end up back here. During the pandemic, the club decided to furlough its players because of the costs and were unable to fulfil their fixtures and, as a result, the Kent side were handed a fine and a points deduction. A new squad was built and their points total broke even after nine months. On the penultimate game of the season, they moved onto one point which is how it all ended.

The old Dover club first crossed paths with City in 1965 and their successors, Athletic, in 1988; in the 43 games played, the honours are very even with their sixteen wins just one more than City’s total. There have been some memorable games in that sequence with none more dramatic than the last two which were played during our run to the FA Trophy semi-finals in 2015. City were the underdogs when they travelled to Crabble for the quarter final tie but with only minutes left they led their higher level opponents 3-1, only to see two late goals take the clubs back to Twerton Park. Goals from Dave Pratt and Chas Hemmings gave City a dream start in the replay but a reply from The Whites paved the way for one of the tensest second halves witnessed in recent seasons.

On Saturday, Dover will be aiming to improve on their modest league record at Twerton which has seen only four wins, although they achieved two of these in their most recent visits some ten years ago. Their manager Andy Hessenthaler, the former Watford midfielder who has also been in charge at Gillingham, Leyton and Eastleigh, can call on former Manchester United midfielder Lee Martin and leading scorer Alfie Pavey.

It is always good to face old friends and rivals and supporters can buy tickets in advance at the City website for what should be an intriguing match.