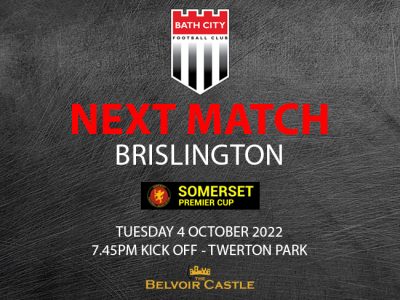 City are quickly back into cup action tomorrow evening with Brislington making the short journey to Twerton Park for a Somerset Premier Cup 1st Round tie. Although it is likely to be a much changed side that lines up to face the Western League club, City will hope it is the start of another successful run in the county cup competition. Last season saw the Romans reach their first final since the 2007/08 season thanks to wins over Clevedon Town, Portishead Town, Welton Rovers and Frome Town. This run saw them face Yeovil Town at their Huish Park home, where the National League side ran out 3-0 winners to lift the trophy.

Brislington currently sit in third place in the Western League Division 1, having taken voluntary relegation from the Premier Division during the summer due to the extra travelling involved at that level. They have won nine and draw two of their opening 13 league games, including big victories over Bristol Telephones, Odd Down AFC and Bishops Lydeard.

The clubs have previously met three times in the competition, all at Ironmould Lane, with City’s only win coming after a penalty shoot-out during the 1998/99 season. The most recent clash in November 2004 saw Brislington run out 5-0 winners, as Gary Owers fielded an entire youth team, the game coming just three days after City famous FA Cup victory over Barnet.

Admission prices have been reduced for the game and you can save a further £1 on online advance ticket sales up to 23.45 on Monday 3 October.