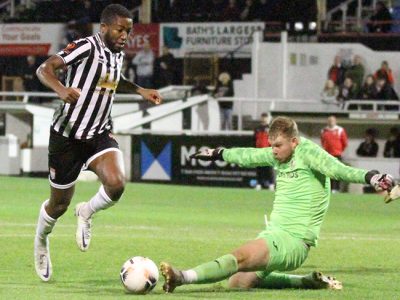 Two Scott Wilson goals and a great strike from Rex Mannings saw City ease into the Somerset Premier Cup 2nd Round with a 3-0 win over Brislington at Twerton Park this evening. The opening goal arrived on 24 minutes when Elliott Frear’s pinpoint cross picked out Wilson to head home from six yards out. City couldn’t add to the scoring before half-time but a minute after Alex Fletcher had crashed a shot against the frame of the goal, Mannings made no mistake from 18 yards to make it 2-0 on 54 minutes. And within 60 seconds City made the game safe when Wilson intercepted a poor pass before rounding keeper Dorrington and rolling the ball into the net. It got worse for the visitors on 67 minutes when Dodimead received a straight red card for dissent. Fletcher had the ball in the net on 77 minutes, but his header was ruled out for a foul, and then seven minutes later Dan Hayfield fired a shot against the bar, Frear seeing his follow-up well saved by Dorrington. The keeper made several other excellent stops before Joe Wright was finally called into action two minutes from time when he blocked Tobin’s well-struck shot.