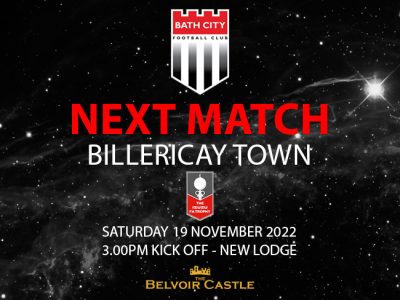 Following the dreadful injury sustained by Alex Fletcher in the abandoned match against Dulwich Hamlet and a worrying week since for all connected with the Club and the wider football community, City return to action on Saturday when they start what will hopefully be a long run in the FA Trophy.

The second round draw pairs them with a trip to Billericay Town, who become the third Essex club we have faced in four seasons at this stage of the competition.

Following their relegation from National League South back in May, Ricay are now competing in the Isthmian Premier League. After a difficult start with only three points gained from their first five matches  things improved with a run of five consecutive wins. They presently sit in 11th position, ten points behind leaders Hornchurch who they lost 3-0 at home to on Tuesday evening.

To reach next Saturday’s meeting with City they have eliminated Margate and Haringey in the Trophy while convincing wins over Leverstock Green and Enfield saw Dan Brown’s team progress to the 3rd Qualifying Round of the FA Cup where they lost in a replay to Biggleswade.

Of course, we met twice in the League last season, the match at Twerton being the very first fixture with City getting off to a great start. Goals from Mo Touray, Cody Cooke and Alex Fletcher secured a 3-0 win to send 1180 fans home happy and full of anticipation for the season.

However, the warning signs were certainly there for the visitors and they spent most of the season rooted to the foot of the table, never rising above 18th. While City also fared poorly, a win at Hungerford on Easter Monday meant that we visited New Lodge for our final away fixture with the knowledge that victory would ensure our survival. This was duly delivered with goals from Alex Fletcher and Cody Cooke cancelling out an earlier Billericay strike.

This must have been a particularly bitter pill for Billericay, whose fate was sealed a few days later, as it was City who ended their play off ambitions on the final day of the 2018/19 season with a win at New Lodge, preparing them for the eliminator with Wealdstone a few days later.

However, despite collecting seven points from our four visits in the League, the Essex club came out on top in the only knock out fixture, winning a 2nd Qualifying Round FA Cup tie by 4-2 in 2019.

City supporters first visited the ground in the early years of this century when Chelmsford City were tenants and there have been significant improvements since with cover now on all four sides and plenty of seating. Former owner Glenn Tamplin has moved on but his time at the Club can still be remembered in the murals at the entrance to the ground! There is a sizeable clubhouse while Billericay High Street is around 20 minutes walk away with a good selection of pubs.

Supporters travelling to the match should note that New Lodge is a cashless stadium and purchases in the refreshment outlets and shop are only by card as is the case with ground admission. Tickets can be bought in advance from the Billericay website.

The 160-mile trip from Bath will take around 3.5 hours. A Supporters Club coach will definitely be running and you can book a seat here. The journey by road is really the only other option as there is a bus replacement service in Essex on Saturday and no trains returning from Paddington in the evening due to industrial action.

Whether attending the match in person or following the action via Bath City Radio, City supporters will be hoping the team can reward their absent striker with a win and a place in Monday’s 3rd round draw.