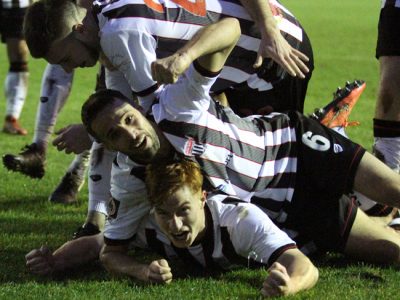 City began 2020 by completing the double over local rivals Chippenham Town at Hardenhuish Park this afternoon. As with the win at Twerton Park on Boxing Day the Romans had to come from behind but goals from Ryan Brunt, Tom Smith and Louis Britton secured the deserved win, and they could even afford a late missed penalty. City had the ball in the net after just 10 minutes but Brunt’s header was ruled out for an infringement and the hosts had already shown an attacking threat before this escape. One such break forward saw Chambers collect the ball on the edge of the box but, with Ryan Clarke in no-mans-land, he could only tamely lift the ball into the relieved keeper’s arms. In response Joe Raynes fired City’s best chance over the bar before the deadlock was broken three minutes before the break through Zebroski’s neat finish from eight yards. City still went into the break on level terms though when a minute into stoppage time Raynes and Dan Bowry combined down the right flank to set up Brunt who shot past Puddy from close range. Playing up the considerable Hardenhuish Park slope the Bluebirds couldn’t repeat their swift attacks after the interval but kept City at bay with a disciplined defensive performance. This resistance was broken on 69 minutes when Noah Chilvers tapped a free kick into the path of Smith to fire home an unstoppable 30 yard shot. Chippenham twice had free-kicks in even better positions after this but couldn’t match Smith’s quality. Frankie Artus then hit the post as City looked to seal the victory and when Ross Stearn was tripped in the box by Rigg on 83 minutes they had the perfect chance to do so. However, Smith saw his penalty kick saved at full-stretch by Puddy to keep the game in the balance. But with two minutes left the three points were secured when Smith set up Louis Britton to hook home his first goal for the club.