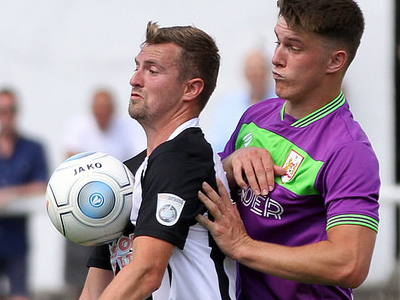 City came from 2-0 down to run out 5-2 winners in their latest pre-season friendly at Street this evening. The reigning Western League champions – preparing for a first season in the Southern League – deservedly led by a single goal at half-time, O’Hare heading past Kieran Hodges on 16 minutes. City’s starting XI included a number of trialists and youth team players but five changes at the interval saw a stronger line-up take to the pitch for the second half. However, before they could make this quality count the Cobblers doubled their lead, O’Hare on target again with a well-placed 48th minute free-kick. Three minutes later City struck, Adam Mann riding several challenges before lashing a 25-yard shot into the net. And on 55 minutes he turned provider, setting up Frankie Artus to stab the ball past keepre Punchard. Just another four minutes passed for City to go ahead, John Mills latching onto a loose ball just inside the box and netting his first goal in City’s colours. And he only had to wait another eight minutes for a second, stealing the ball off a Street defender and showing the finishing that has brought him nearly 200 goals in the last four seasons. The turnaround was completed on 73 minutes when Sean Bird burst clear to slot home goal number five.