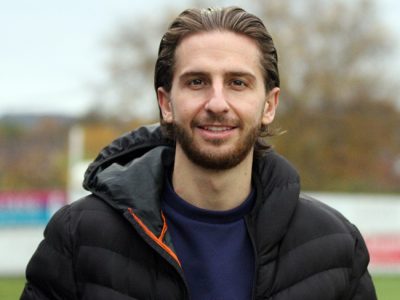 Taken from our Matchday Programme, we have an exclusive for you today, a first interview with new signing, forward Dave Sims-Burgess who joined City from Yate Town last weekend. Here is what he had to say:

Firstly welcome to Bath City, how did the move come about?
“Thank you, I’ve been playing well for Yate and scoring goals, with that I believe Bath have sent coaches to watch a few games and then they approached Yate last week to sign me.”

Can you give us a brief lowdown on your career so far?
“After leaving Filton College going into men’s football, I started at Chipping Sodbury Town for two years where we got promoted. Part of the management then went to Paulton Rovers who were the league above and they took a few players including myself. I was at Paulton for a year when I got a move to Yate at the end of that season. I stayed at Yate for the year after where we got promoted through the play-offs to the Southern League. I left Yate after promotion to go back to Paulton for the following year. At the end of that season, I then went back to Yate to play in the Southern Premier which is this season to date.”

How would you describe yourself as a player?
“I am a fast, direct player who likes running at defenders and loves scoring goals”

Which position on the pitch would you say is your favourite?
“Any of the forward positions, but recently have been playing as a right forward which I have enjoyed.”

What do you know about Bath City, do you know much about this level?
“I know Bath is a big club and I’ve heard only positives about how the club is run. I do not know much about this level of football. I can only compare with Dover who are bottom of the Conference, whom I played against with Yate this season in the FA Cup and we beat them over two legs and this game gave me confidence that I can compete at a similar level of football.”

Do you know any of your new teammates?
“Yes, Joe Raynes was on loan to Yate at the start of the season, I went to school with Jack Batten who’s a good mate of mine. Callum Wood was with Yate pre-season, I’ve also played with Josh Owers at Yate.”

How excited are you to make the switch to Bath City, was it an easy decision?
“I am very excited to get started, Bath was probably one of the only teams I would have left Yate Town for.”