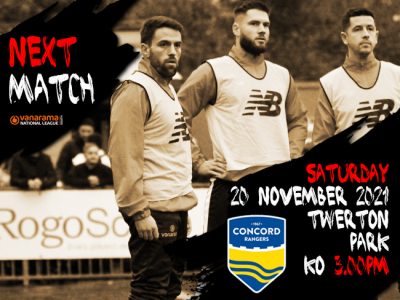 Twerton Park stages its second match of the week on Saturday when we welcome Concord Rangers for a league fixture. After the disappointment of losing to Hampton & Richmond on Tuesday, City will be hoping for a repeat of the win in the previous Saturday home match against Welling.

This will be the Club’s Community Day with supporters invited to pay what they like. The Beach Boys are currently in 7th position in the league table with 21 points from their 13 matches. While they have been in the top half throughout, their form has been rather inconsistent especially away from home with a record of one win (at Tonbridge), three draws and two defeats (including a 5-2 reverse at Havant).

However, they come to Twerton on the back of two home wins, against the leaders Dartford and on Saturday a 2-1 victory over Eastbourne, despite playing the last 23 minutes with only ten men.

27 goals have been scored in total in those six away matches, with the Essex club conceding 15 of them so City supporters can perhaps expect plenty of goalmouth action on Saturday!

Concord made little impression in the FA Cup as they were the first victims in St Albans’ successful run, losing 2-0 away in a 2nd Qualifying Round replay.

Last season’s curtailment meant we only met Concord at Thames Road in a midweek rearranged fixture; a match mainly remembered for a nightmare seven hour coach journey beforehand and a last minute winner at around 10.30 pm in a 3-2 defeat.

Although they have become regular opponents since our first meeting in 2013, Saturday will see the Beach Boys’ first visit to Twerton since a cold January evening in 2020 when we suffered a 2-1 defeat in an FA Trophy replay. Two months before that the league match saw Adam Mann, Noah Chilvers and Tom Smith the scorers in a 3-1 home victory.

In fact City have lost only one of the seven league encounters played at Twerton and supporters will be hoping that the Community Day attractions, including an outside bar, pizza van, face painting and visitors from Bath City Farm will be complemented by three very valuable points!