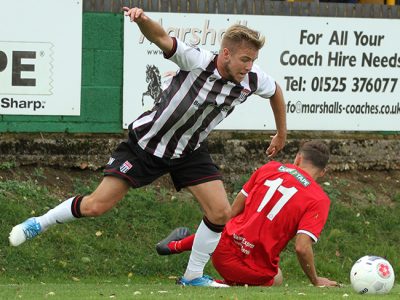 City were beaten 2-1 at Hemel Hempstead Town this afternoon thanks to a late strike after the home side had been reduced to ten men. Playing down the considerable Vauxhall Road slope the Tudors began the game on the front foot, testing Ryan Clarke on a couple of occasions and seeing a header narrowly clear the bar. Slowly City began to gain a foothold in the game and they were rewarded with the lead on 32 minutes when Midson handled Connor Riley-Lowe’s corner. Brunt stepped up to confidently net the penalty for his fifth goal in six games. He should have added a second two minutes before the break when set up by Tom Smith but Boness blocked his shot at the near post. Then Hemel conjured an equaliser out of nothing in first half stoppage time when Nash turned on the edge of the box and found the top corner with a rising shot. The second half began with Ross Stearn striking the top of the crossbar with a 20-yard free-kick but this was as good as it would get for City. They were largely keeping Hemel at bay although Ashford blazed over the bar from eight yards out on 72 minutes then four minutes later Alex Hartridge cleared a Howell header off the line. With 11 minutes left the hosts were reduced to ten men, Howell seeing red for the second time this season for a nasty challenge on Matt Bower. However, City failed to make their man advantage pay and three minutes from time they were caught out by a quickly taken corner that saw Sterling’s shot hit the post but Midson react fastest to steer home the rebound.