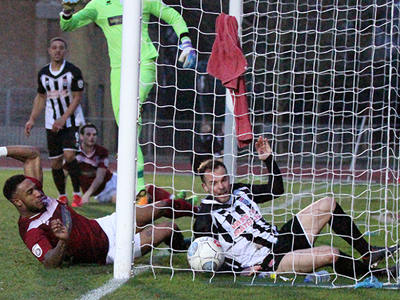 An equalising goal two minutes from time denied City a victory at Chelmsford City that their overall performance just about deserved. Having lost on their last four visits to this part of Essex it looked as if Ross Stearn’s goal two minutes into the second half would finally reverse this poor run. However, substitute Hitchcock’s 88th minute header meant the points were shared. After a bright opening 10 minutes from the home side City slowly began to gain the upper hand and went on to control the rest of the first half. Nat Jarvis looked to have given City the lead on 25 minutes when he headed home from a Jack Compton cross only for the linesman to rule him offside. The same player then forced a great stop from keeper Beasant before City had a clear penalty appeal, a defender blocking Compton’s cross with his arm, inexplicably ignored by the referee. This meant the game reached the interval level but within two minutes of the restart Andy Watkins’ determined run into the box saw his deflected cross loop over Beasant where Stearn slide the ball into the net. The home side finally upped their game after this and Luke Southwood had to be at his best to keep out Graham’s shot before a Hitchcock header was cleared off the line. With seven minutes left City were desperately unlucky not to grab a second goal when Braham-Barrett’s attempted back header looped high over Beasant. However, he managed to recover and clear the ball from under the bar just ahead of Matt Richards. And the Clarets made the most of this lucky escape five minutes later through Hitchcock’s well-placed header. Surprisingly, Chelmsford didn’t press for a winner in the additional five minutes but City couldn’t take advantage of several promising positions and had to settle for a single point in the end.