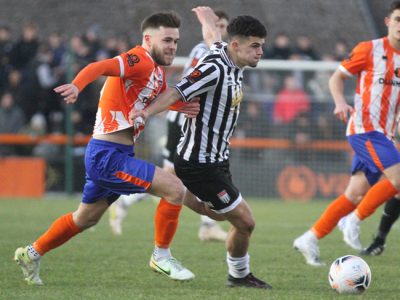 A last gasp goal denied City a deserved point at Braintree Town this afternoon. The hosts struck four minutes into stoppage time to complete a turnaround having trailed at the break. For 45 minutes both sides had battled valiantly on the firm – but perfectly playable – Cressing Road surface but only an early shot straight at Max Harris troubled either keeper. However, into stoppage time Rex Mannings’ shot was diverted home by Jack Batten – despite fervent complaints from the Iron that he was offside – for his first goal of the season. After a bright start to the second half for Braintree, City twice went close to extending their lead. Cody Cooke saw his 59th minute header clawed off the line by keeper Sims then six minutes later Mannings raced clear on goal only for Sims to produced another fine stop. Then with 15 minutes to go City failed to deal with a free-kick and White found the net with a low shot. And the Essex side grabbed all three points on 94 minutes when a great run by Reynolds saw the ball centred for Altintop to fire home.