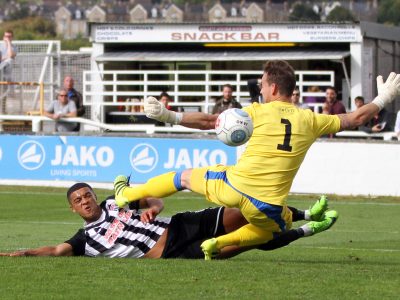 Nat Jarvis struck an FA Cup hat-trick as City comfortably saw off Knaphill FC by six goals to nil at Twerton Park this afternoon. After Gary Owers’ shock departure in the week, the last thing caretaker manager Jim Rollo probably wanted was to face a side three levels below City playing one of the biggest games in their history, but he watched his team put in a thoroughly professional performance to secure a 3rd Qualifying Round place. Jarvis set the tone early on with a header that Knaphill keeper Shelley did well to turn over the bar. The Combined Counties Premier Division side harried City well after this, nearly benefiting from a couple of poor clearances by debutant keeper Jojo Wollacott, but on 21 minutes Jack Compton’s 22-yard free kick gave the Romans the lead and settle any nerves. Seven minutes later Nick McCootie’s cross was slid home by Jarvis to make it 2-0. Kevin Amankwaah had the ball in the net before half-time but it was ruled out for a foul on Shelley by McCootie, however just past the hour mark the City no.10 broke free down the left to set up Andy Watkins to side foot home goal number three. McCootie then got on the scoresheet himself, taking advantage of a misplaced clearance to make it 4-0 in the 75th minute. Jarvis took centre stage after this, first heading home Frankie Artus’ cross five minutes from time then netting his third and City’s sixth with a stoppage time tap-in from Jamie Lucas’ cross.