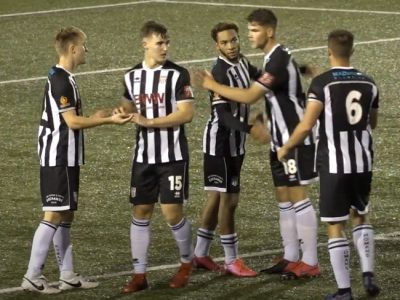 A Freddie Hinds goal four minutes into the second half was enough to see City past Slough Town and into the FA Cup 4th Qualifying Round this evening. In an evenly contested tie, City’s defence was again outstanding, backed up by several excellent saves from Ryan Clarke. The first of these saw him keep out Robert’s 10th minute shot, as the home side enjoyed the better of the early exchanges. It wasn’t until the 25th minute that City threatened the Slough goal, Tom Smith’s deflected free-kick flying narrowly wide, though three minutes later they should have been awarded a penalty when Hinds was clearly tripped in the box but inexplicably the referee took no action. Twice before half-time Clarke produced further smart stops to ensure the game reached the break goalless. Then on 49 minutes a great run by Jason Pope saw him feed Tom Richards and his cross picked out an unmarked Hinds, who made no mistake from eight yards, lifting the ball over Turner. A couple of minutes later Clarke produced his best save of the night to keep out a header from a free-kick. Hinds then shot narrowly over and Smith missed a great chance to double City’s lead, Turner saving his shot. City’s defence now began to gain the upper hand and sights of goal became increasingly rare for the Rebels. The closest they came was when Harris found space in the box but couldn’t direct his 86th minute header on target. City saw out the remaining minutes plus the additional five with no further scares and can look forward to Thursday FA Cup draw.