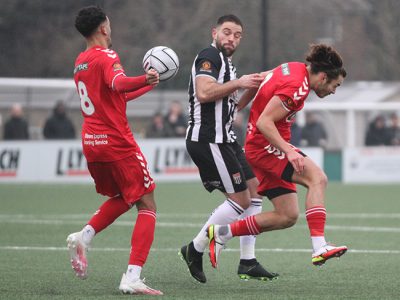 Cody Cooke’s 15th goal of the season was the lone highlight of a disappointing afternoon in Hertfordshire today, as City went down 3-1 to Hemel Hempstead Town. The Tudors came into the game still looking for a first home league win of the season but, playing down the Vauxhall Road slope, they enjoyed the better of the first half. Ryan Clarke had to be at his best on several occasions before he was finally beaten on 38 minutes when a crossfield ball picked out Scott-Morris and he fired the ball into the net. City’s only sight of goal before that saw Alex Fletcher shoot narrowly wide but four minutes after they fell behind a Dave Sims-Burgess cross picked out Cooke to level with a stunning volley. The second half began in a frantic fashion with chances at both ends, several last ditch blocks denying the home side, before King did brilliantly in the Hemel goal to keep out Fletcher’s effort. However, it was Hemel who regained the lead on 64 minutes. Hughes’ weaving run saw him ride several tackles and, just when the chance appeared to have gone, his mis-hit shot appeared to wrong-foot Clarke before rolling into the net. There was no immediate reply from City this time as Hemel stood firm and with five minutes left Addai’s deflected shot looped over Clarke to leave the Romans empty-handed.