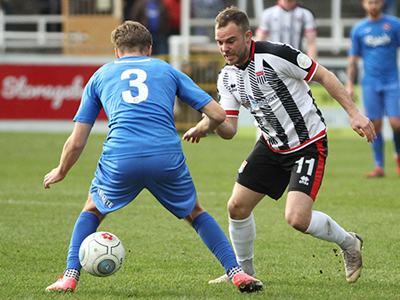 City missed the chance to tighten their grip on a play-off place this afternoon as they drew 1-1 with Truro City at Twerton Park. On a remarkable day in the Vanarama National League South when no side in the top half of the table won, City had enough chances to have comfortably secured victory but, with only Antony Straker’s early penalty to show for their dominance, the visitors made them pay when ex-Roman Harvey equalised 11 minutes from time. City got off to the perfect start when, with just a couple of minutes on the clock, Adam Mann’s pass sent Freddie Hinds racing into the box where he was bundled to the floor by Grimes. Despite missing from 12 yards last week Straker stepped up and confidently sent Rivers the wrong way. They couldn’t build on this start though as the game was largely a scrappy affair with neither side able to gain the upper hand. On 35 minutes it took a great goalline block from Andy Watkins to deny Truro an equaliser and this escape appeared to wake City up as they finished the half on top, with Hinds and Mann both forcing fine saves out of Rivers. A tactical change at the interval saw Ryan Brunt replace Watkins and the early exchanges of the half were all City. Brunt drew another good block out of Rivers before Hinds got clear on goal but saw his shot bounce back off the post. Jack Batten had to be at his best to block a far post effort from a rare Truro foray forward but it was increasingly clear City needed a second goal. And on 77 minutes they should have had just that, Hinds’ pace again slicing open the Truro backline but his dinked shot over Rivers drifted wide of the gaping goal. Two minutes later City lost possession in their half and the ball was crossed for Harvey to steer home the equalising goal. The closest City came to regaining the lead was in the final minute when Sean Rigg’s dipping effort struck the top of the bar with Rivers well beaten but it could have got even worse for the Romans in stoppage time when a great chance for Truro was blazed over the bar from close range.