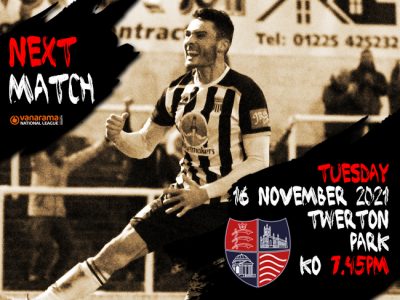 City have the opportunity on Tuesday evening to quickly put Saturday’s disappointing performance behind them when they entertain Hampton & Richmond at Twerton Park.

This match has been rescheduled as the original date in October saw both clubs involved in the FA Cup.

Our opponents from London currently sit in 14th position in the table with 16 points from their 11 matches. That could well have been from 12 played as on Saturday they were losing at home to Braintree before the match was abandoned due to floodlights failure.

The Beavers have an equal number of wins, draws and defeats from their six away matches. The most impressive performance was a 5-0 demolition of Eastbourne on the opening day of the season and they also won 3-2 at Welling before their last trip which ended in a 4-3 reverse at Dulwich, suggesting that there could be plenty of goals on Tuesday. The latter defeat was the first suffered in the last eight matches.

On the day that City lost at Banbury in the FA Cup Hampton were eliminated at Ebbsfleet, having defeated Walton Casuals and Wimborne Town in earlier rounds.

The two clubs only met once last season with City going down 1-0 at The Beveree almost exactly twelve months ago. The last time we hosted the Beavers was for another evening match in September 2019 when goals from Ryan Brunt and Tom Smith sealed a 3-0 win.

Since we first crossed paths in 2007 City have achieved four wins in the seven matches played at Twerton Park, with Hampton returning home pointless in the last three. City supporters will be hoping that this winning sequence for their team continues!

A reminder that tickets can be bought in advance from the City website.