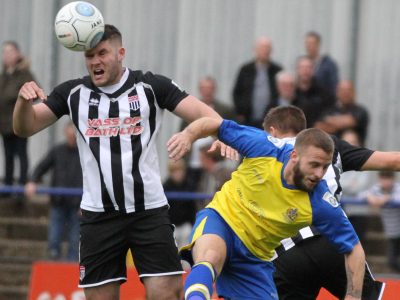 New manager Jerry Gill watched his side suffer a 2-0 defeat to St Albans City at Clarence Park this afternoon. Jim Rollo still directed proceedings from the touchline, with Gill watching the first half from the camera gantry and the second from just behind the dugouts, as a goal in first half stoppage time then just before the hour mark secured the points for the home side. There had been nothing between the sides for 45 minutes, City best chances falling to Nat Jarvis, with an early shot blocked by Snedker and then again testing the Saints keeper with a low shot from a narrow angle. St Albans had produced some neat approach play and one such spell of possession right on half-time ended with Murrell-Williamson’s well-struck shot finding the corner of the net. If City could feel justifiably aggrieved at being a goal down they could only blame themselves when a mix-up between Jack Batten and Luke Southwood gifted Walker a simple tap-in to make it 2-0 on 59 minutes. City huffed and puffed after this, Jack Compton forcing a save from Snedker with a low free-kick and Nick McCootie heading an effort over the bar, but the Saints comfortably saw out the game to give Gill a disappointing start to his Roman reign.