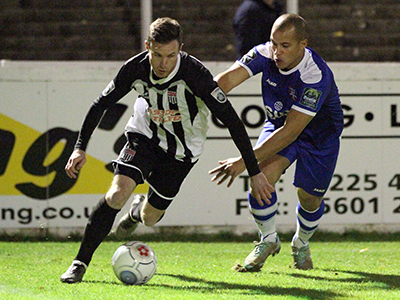 City face a long trip to Kent next Tuesday after they failed to break down a resolute Margate side at Twerton Park this evening in their delayed FA Trophy 3rd Qualifying Round tie. From the opening exchanges it was clear the visitors would be happy with a 0-0 draw and for all City’s possession and neat approach play they lacked the cutting edge to find a way through the wall of blue shirts. City were largely reduced to efforts from outside the box during the first half, the closest a deflected effort from Frankie Artus that dropped just over the bar. They also couldn’t take advantage of a number of set-pieces and it was no surprise the game reached the interval goalless. City upped their tempo during the early stages of the second half but still couldn’t get a clear sight of the Margate goal, George Rigg’s low shot that flew inches wide of the post giving them a rare scare. With City beginning to run out of ideas the Gate enjoyed their best spell of the game and were only denied the lead by a great one-handed save from Luke Southwood as the game entered it final quarter. After this they were content to slow the game down as much as possible and, although City kept going right until the final whistle, this tactic got it desired outcome.

The sides will meet against at Hartsdown Park on Tuesday 5 December (ko 7.45pm) with Hendon awaiting the winners after they beat Slough Town this evening on penalties.