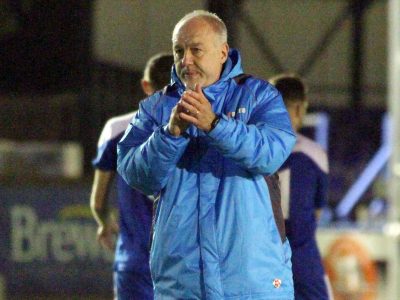 Bath City FC today announces that Gary Owers has sadly resigned and left his post as Team Manager to take a new role at Torquay United in the Vanarama National League.  His departure follows a 20 month stay that saw him oversee a successful relegation fight in 2015/16, before an improved 2016/17 season, in which City were always on the fringe of the play-off places.

With the Club moving into Community Ownership and having a stated ambition to challenge for promotion, it signed a new two-year contract with Gary in May. Following a slow start to the season, City have won six out of their last eight matches and currently sit in ninth place, one point off the play-offs positions in the Vanarama National League South.

Bath City FC will be entitled to a compensatory payment from Gary’s new club.

The Bath City Board would like to place on record its thanks to Gary for his tenure at the Club and appreciation that he is leaving the team in a much better situation than when he arrived.  Assistant Manager, Jim Rollo, will take charge of Saturday’s home FA Cup Qualifying fixture against Knaphill, and the Club Board will meet this week to discuss the appointment of a new manager.