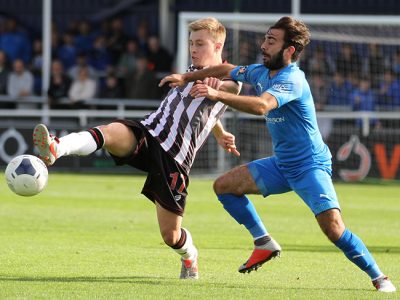 City exited the FA Cup this afternoon with a 4-2 defeat at the hands of Vanarama National League South rivals Billericay Town. The hosts started brightly and should have been ahead before Adam Mann’s deflected shot gave City the lead on 11 minutes. This advantage only lasted six minutes though as a Parkes cross was turned into his own net by Joe Raynes. Two goals in the closing stages of the half then turned the tie very much in the favour of Billericay. On 38 minutes Robinson headed home a corner then a minute into stoppage time Parkes rounded Ryan Clarke before tapping the ball into the net. Into the second half Clarke kept City in the game was several great saves and when Ryan Brunt made it 3-2 from close range in the 71st minute hopes of a comeback, that had look impossible at the interval, were raised. And it looked like City would have the perfect chance to grab an equaliser a minute into stoppage time when Brunt was brought down in the box by Krasniqi’s clumsy lunge but inexplicably the referee failed to award a penalty. Moments later City’s sense of injustice was deepened when Billericay broke away and Robinson made it 4-2 with another tap-in. Remarkably there was still time for the referee to miss another stonewall penalty when Henry scythed down Sam Pearson in the box but by then the damage had been done.