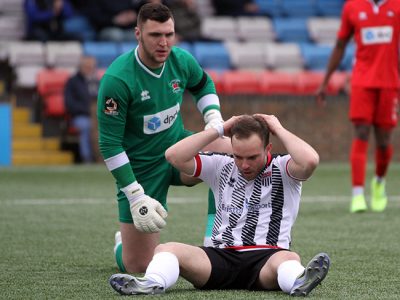 City stretched their unbeaten run to six games and remain at the heart of the Vanarama National League South play-off battle following this afternoon’s goalless draw at Eastbourne Borough. After Ross Stearn missed a great chance with less than two minutes on the clock the home side belied their lowly position by dominating the rest of the first half. They enjoyed success down both flanks and towering no.9 Ljubicic was a constant nuisance to City’s overworked backline. However, Eastbourne’s finishing lacked the quality of their approach play. Ryan Clarke was equal to a couple of on-target efforts and one Campbell shot struck the top of the crossbar but, even faced with a first-half corner count that reached double-figures, the league’s best defence remained intact at the half-time interval. The break saw Tom Smith replace Joe Romanski, the Romans switching to a 4-3-3 formation, and from the restart they took control of the game. Eastbourne’s attacking threat was almost entirely removed and City’s passing game finally clicked into gear. Despite the improvement clear sights of goal were still proving harder to come by though. Smith saw a couple of efforts blocked, Joe Raynes sent a low shot two yards wide and Borough keeper Smith comfortably dealt with Anthony Straker’s drive. A free-kick for a foul on Sol Pryce inches outside the box came to nothing before Smith’s well-struck shot brought the first difficult save out of his namesake. When another Straker effort flashed narrowly wide of the goal with a minute left it looked as if that would be the final drama but deep in stoppage time there was almost one last twist to the game. Briggs’ burst into the box was ended when he went over Joe Rayne’s challenge and when the referee whistled it looked for all the world that he was going to point to the spot. Instead, to the relief of those who had made the long trip from the West Country, he hadn’t been fooled by the dive, awarding City a free-kick and booking the young substitute.