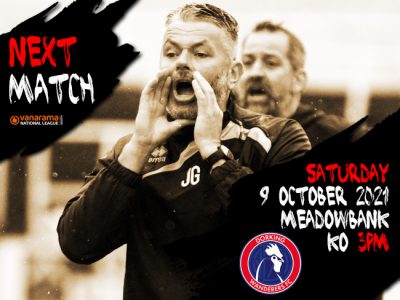 City return to league action on Saturday when they travel to Surrey to face Dorking Wanderers.

When the fixtures were released this looked like being one of the toughest of the season as Marc White’s club were widely regarded as favourites for promotion having topped the table by five points before last season’s competition was declared null and void.

So supporters would have assumed that City were in pole position on learning that we are currently two places above Dorking and not in fact in 11th place. A failure to keep a single clean sheet has cost them dearly in some close matches and their only wins so far have been at home to St Albans and Billericay.

However Wanderers have joined City in the last qualifying round of the Cup having defeated Weston Super Mare last Saturday and now look forward to hosting Hayes & Yeading United. Like ourselves, Dorking have been fortunate to draw three lower level opponents so far in the competition.

This will only be the fourth meeting in the league between the two clubs with City unbeaten in their previous visits to Meadowbank. The win back in early December was probably seen as the shock result of last season with City visiting the high-flyers on the back of six consecutive defeats. But goals by Tom Smith and Donovan Wilson backed up by an excellent defensive display, with Ryan Clarke performing heroics, earnt a 2-1 victory and provided some revenge for the defeat suffered in the previous season’s play-off eliminator.

The match was also noted for being the first of the season in which we played in front of spectators and for the bizarre incident when Frankie Artus was given a red card for wasting time while sitting on the bench.

After the season was suspended City returned to Meadowbank a few weeks later for a friendly match and goals from Tom Richards, Alex Fletcher and Donovan Wilson secured a 4-3 win.

Dorking started life in the Crawley and District League as recently as 1999. Amongst the founders was present chairman and team manager Marc White and he has helped the club to a remarkable eleven promotions in just over twenty years.

Obviously the ground has seen many improvements to facilitate this rise up through the pyramid and the neat venue has again been changed since most City fans last visited for a 0-0 draw in February 2020 with the addition of some covered accommodation behind one goal.

The ground is located in a picturesque setting near the town centre with the tall spire of St Martins Church overlooking the ground from one side. While the view of the Surrey Hills from the grandstand is similar to the one of Lansdown from Twerton Park.

Supporters travelling to Dorking on Saturday should note that there is segregation in place at Meadowbank this season. There is a useful guide for visiting supporters here and tickets can be bought in advance from the Dorking website

The 120 mile trip from Bath will take around 2.5 hours. The Supporters Club is running a large coach and full details can be found on its website along with those for the trip to Banbury seven days later.

The train trip from Bath Spa will take around the same time with a picturesque ten minute walk to the ground from one of three Dorking stations.

And if you cannot get to Dorking do remember that you can be there in spirit by tuning in to the excellent online commentary provided by BCIR!