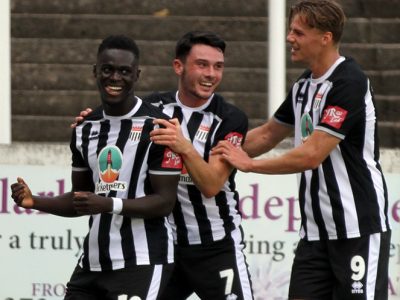 City welcomed supporters back to Twerton Park for a league game for the first time since March 2020 in perfect style this afternoon, with a 3-0 win over Billericay Town. Although the visitors enjoyed lengthy spells of possession, particularly during the second half, it was the Romans who were clinical in front of goal, with Mo Touray, Cody Cooke and Alex Fletcher carrying their pre-season form into the campaign proper. After an early chance for Cooke, which keeper Vose pushed over, both sides took a while to settle into the game. However, as the half progressed City began to look the more threatening. Vose produced another good stop from Tom Smith’s free-kick and Cooke sent a free header over the bar. Then two minutes before the break Touray made just enough space to unleash a stunning left-foot shot that flew past Vose from 15 yards. The second half saw City struggle to retain the ball but for all their possession Billericay rarely threatened an equaliser. And on 75 minutes City took full advantage as Cooke beat Vose at his near post with another well-struck shot. A long range effort three minutes time by Reason struck the bar with Ryan Clarke beaten, which could have made for a testing end to the game, but instead it was City who capped the perfect start to the new season when Fletcher raced clear to confidently fire past Vose in the second minute of stoppage time.