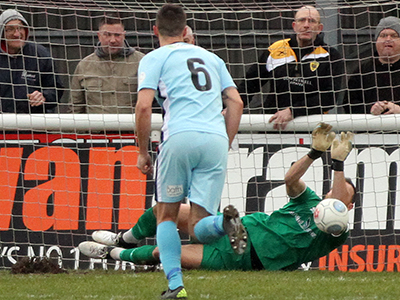 City remain unbeaten in 2019 but had to settle for a point this afternoon against a resolute Gloucester City side in difficult conditions at their temporary Evesham home. It could have been worse for the Romans though as keeper Ryan Clarke saved a first half penalty. A bobbly uneven pitch, combined with a strong wind whipping across the exposed ground, made it tough going for both sides for the whole 90 minutes. City still looked to pass the ball around when possible and after a slow start began get on top. They failed to test ex-City keeper Wollacott with a couple of long range efforts before Frankie Artus saw his header cleared off the line by Avery. Having scored just 18 goals in their 27 league games so far this season the home side had produced little attacking threat but just past the half-hour Jackson went down under a challenge from Clarke and the referee pointed to the spot. A disputed penalty last week had been enough to give the Tigers a first league win since September but Jackson’s spot-kick was too close to Clarke and the game remained scoreless. City had a further scare when Wollacott’s wind-assisted clearance bounced just over the bar before they ended the half with Freddie Hinds heading a Jack Batten cross narrowly wide. With the wind behind them after the interval City pressed the Tigers back. Hinds had the ball in the net from a James Morton pass on 56 minutes but the linesman had flagged him offside and a series of corners came to nothing. The introduction of Ryan Brunt just before the hour mark gave City new attacking impetuous but they still couldn’t find a way past the massed ranks of yellow shirts. This was until two minutes from time when a great burst forward by Joe Raynes saw him centre for Brunt but he couldn’t repeat his heroics of a week ago, lifting his shot over the bar and, with it, City’s last chance of grabbing all three points.