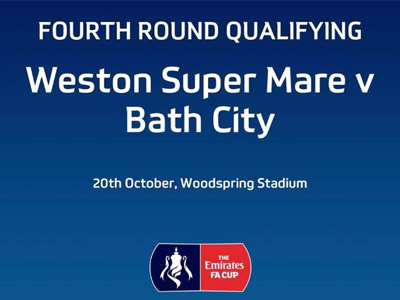 Bath City return to FA Cup action this Saturday with the eagerly awaited trip to local rivals Weston-super-Mare. With a place in the first round proper of the Cup at stake, the Romans will be fired up for this derby and buoyed by their recent run of three away wins in a row.

In the most recent meeting between the two clubs, City ran out 2-0 winners at Twerton Park in front of 1,000 fans on a sunny August Bank Holiday Monday, with goals from Sean Rigg and Joe Raynes as the Seagulls failed to get out of first gear.

However, City’s most recent visits to the Woodspring Stadium have included a 4-2 league defeat in January and a knock-out on penalties in the Somerset Premier Cup in April. In fact City have only won twice at The Woodspring in the last six seasons, meaning that victory on Saturday will have to be hard-fought despite the host’s poor start to the league season, where they sit rock bottom of the table and winless.

This is a big match for the Club, players and fans and we hope that as many supporters as possible will make the easy trip over to Weston on what is forecast to be a sunny day!