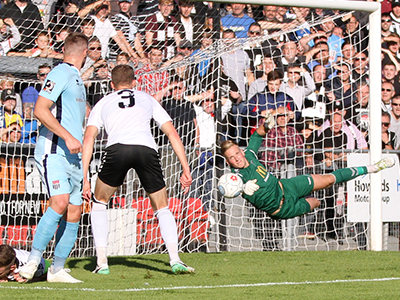 City’s hopes of returning to the FA Cup 1st Round proper after a seven season absence disappeared this afternoon as they were beaten 1-0 by Weston Super Mare at Woodspring Stadium. Despite a well below-par showing from the Romans it still took a man of the match performance from Seagulls goalkeeper Purnell to secure his side a place in Monday evenings draw. After kick-off was delayed for nearly 15 minutes to get the crowd of just over a 1000 – swelled mainly by those who had made the 30 mile trip from Bath – into the ground it was the hosts who settled first. They had already given City a couple of scares before they took a 13th minute lead. Moments after they were lucky not to be reduced to ten men for Bryne’s dreadful challenge on Adam Mann a swift break forward saw Welch’s shot parried by Ryan Clarke only for Hill to tap in the rebound. It took nearly half an hour for City to fashion a chance but Mann was denied by a stunning one-handed save from Purnell which set the tone for the rest of the game. He was rescued by Bryne 12 minutes later, the defender blocking Frankie Artus’ header on the line after a poor punch, before denying the same player with a full-stretch fingertip save. In-between Clarke also had to be at his best to turn Lucas’ shot over the bar. Although City continued to enjoy the majority of possession after the interval the long grass on the Woodspring Stadium pitch blunted their passing game, forcing them to go long which rarely troubled Weston’s backline. And combined with the hosts understandble time-wasting they were rarely under serious pressure from Jerry Gill’s team. And when chances did come Purnell continued to be equal to them. He tipped Ross Stearn’s spectacular overhead kick over the bar then blocked Robby Cundy’s header from the resultant corner. Weston spurned several chances to extend their lead as City pushed more men forward but openings were becoming rarer as Mann and Ryan Brunt fired over the bar. Baffingly the referee only added four additional minutes, when twice that wouldn’t have been unreasonable, which Weston easily saw out to bank the £25,000 prize money and the even more precious 1st Round berth.