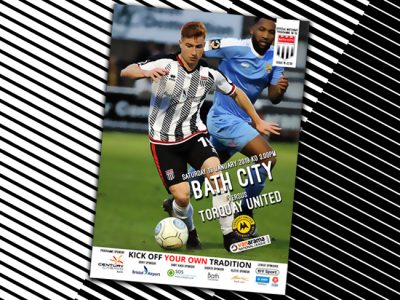 Twerton Park will be the place to be on Saturday afternoon as third-placed Bath City take on league leaders Torquay United in the Vanarama National League South. Kick off – 3PM!

The Gulls have sold out their 1450 away ticket allocation and with hordes of Romans likely to descend on Twerton Park it’s going to be an atmosphere like no other and a game you’ll not want to miss! Jerry Gill’s men are currently unbeaten in seven and have kept five straight clean sheets and they’ll be looking to produce another fine display when Gary Johnson’s side visit Twerton.

Torquay United were relegated from the National League last season and their start to life in the National League South under former City boss, Gary Owers failed to meet the club’s expectations. Owers’ dismissal in September 2018 led to the arrival of the experienced Gary Johnson at Plainmoor. The former Bristol City gaffer has since had the Midas touch at the south coast club and his side have yet to lose a game in the league since his arrival and are currently on a ten game winning streak.

It’s set up to be a thrilling afternoon of football at Twerton Park as two in-form sides go head-to-head in a top of the table clash! Bring friends and family and get behind The Romans as they hunt down the league’s table-toppers.

‘Get behind the City and enjoy the game!’

– The last day to purchase advance tickets is Friday 18th January. The Club Office will be open from 10am – 4pm. Match ticket and season ticket holders should enter via turnstiles 9 and 10 for access to the terraces and turnstile 14 for the main stand. If you’re paying on the gate, please turn up earlier to ease congestion and ensure you enter in good time.

– To speed up the entry process, could all Season Ticket Holders please rip out ticket number 14 before you get to the turnstile and hand to the operator on arrival.

Car parking🚗: Parking at Twerton Park is limited therefore you will need to arrive early to guarantee a space. Our overflow car parking will be available and can be found at: Curo, The Maltings, River Place, Lower Bristol Road, BA2 1EP. £2 per car and the gates close at 6:15pm.

Charlie’s Bar 🍻: The bar won’t be open at half time but will be open before and after the game! Guest ales – Bays Topsail (4%) and St Austell’s Cousin Jack (4%).

Food🍔: Mo-B-Que will have two outlets open throughout the match. One in the normal position and one at the Bath End of the Popular Side Terrace. There will also be an outlet for Torquay fans in the away end. The Supporters Club Tea Bar will be open on the Popular Side throughout the afternoon and the Have a Pinch Crepes stall will be available outside the Club Shop.

Club Shop ⚽️: Our Club Shop will be open pre-match and post-match as usual! The perfect chance to pick up one of the new scarves!