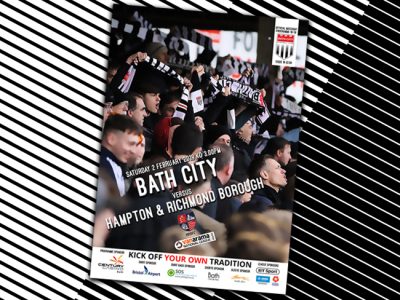 The Romans take their impressive unbeaten run back to Twerton Park this weekend and they’ll be looking to extend it further when they take on Hampton & Richmond Borough in the Vanarama National League South. Kick off – 3pm!

Jerry Gill’s in-form Romans could have been in danger of taking their foot off the gas after the dramatic win against Torquay but they dominated proceedings in a blustery West Country Derby last Saturday and picked up a valuable point on the road. It’s now the turn of Hampton & Richmond to travel to Twerton Park and they’ll be aiming to snatch the points for themselves as they look to pull even further away from the relegation dogfight.

The Beavers, who finished in the play-offs last season, have yet to hit the same heights in this campaign and currently sit in 16th position. The departure of manager Alan Dowson, captain Josh Casey and top scorer Max Kretzschmar to National League South rivals Woking, left the club with some big gaps to fill and it’s been the job of former Hendon boss Gary McCann to build a squad from scratch. The Romans have already taken on the London club this season, coming away with a 1-0 win thanks to a fine second half effort from Sean Rigg. City didn’t have it all their own way in August though with Hampton spurning numerous chances in front of goal and they’ll be looking for revenge when they travel to the West Country on Saturday.

As we edge closer and closer to the business end of the season, your support is needed more than ever as we look to secure a spot in the play-offs! Round up family and friends, head to Twerton Park and get behind the City!

Charlie’s Bar🍺: There will be two mini kegs of Bath Ales’ Gem given away in our free raffle after the Post Match Interviews! Just head into the bar after the game to pick up your ticket. Must be 18 and over to enter. Guest ales – Bath Ales’ Gem (Real Ale version) 4.1% and St Austell’s Tribute 4.2%.

Ordoo📱: Not tried our new pre-ordering system in Charlie’s Bar yet? You might want to this weekend! Download the Ordoo app, pre-order your half time or full time drinks and you will get your first drink (up to the value of £4) absolutely FREE! Download the app here:

Club Shop⚽️: Our Club Shop will be open pre-match and post-match as usual! After a replica shirt or one of our new scarves? We have just received a new consignment so pop in and take a look. NEW IN – Beanie hats that feature the new scarf design!