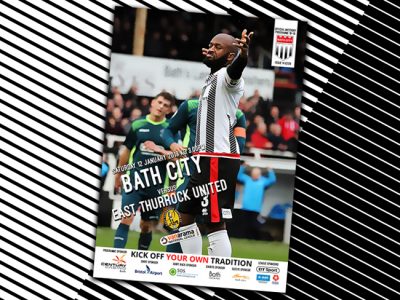 City picked up four valuable points in the last seven days, starting with a patient 2-0 win against Dulwich Hamlet last Saturday. Cheltenham Town loanee Tom Smith and top scorer Ross Stearn wrapped up all three points in front of a crowd of over 3100! On Tuesday night, City battled their way to a first away league goalless draw for 88 matches at Slough Town’s Arbour Park. A point which was enough to lift us up to third in the table!

Saturday sees us take on East Thurrock United at Twerton Park, a side that beat The Romans by a goal to nil back in September thanks to a freak own goal in the 89th minute. Since then The Rooks have tumbled down the table and are now the only team in the division who have yet to record a win on their travels, drawing two and losing ten of their twelve away fixtures.

Jerry Gill’s men will be out for revenge when Saturday comes and they’ll need your support on the terraces! Gather friends and family, head along to Twerton Park and get behind the boys as they look to cement their spot in the play-offs!

Charlie’s Bar 🍻: There will be mini kegs of Bath Ales’ Gem given away in our free raffle after the Post Match Interviews! Just head into the bar after the game to pick up your ticket. Must be 18 and over to enter. Guest ales – Quantock Brewery’s QPA (4%) and St Austell’s Tribute (4.2%)

Club Shop ⚽️: Our Club Shop will be open pre-match and post-match as usual!