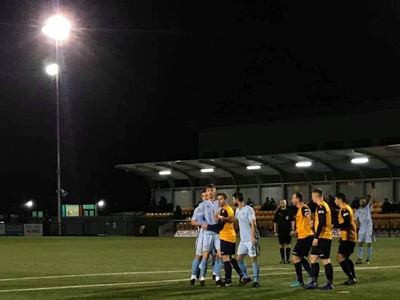 City battled their way to a first away league goalless draw for 88 matches at Slough Town’s Arbour Park this evening, with the point enough to lift them up to third place in the Vanarama National League South table. City were once again down to the bare bones player wise but, after a scrappy first half, they looked the stronger side during the latter stages of the second half, with debutant striker Freddie Hinds twice going close to securing a narrow win. A smart early save from Ryan Clarke, after Kevin Amankwaah diverted a cross toward his own goal, didn’t really set the tone for the game as both sides struggled to get to grips with the 3G surface. Instead the 16th minute booking for keeper Clarke, remarkable as he appeared to be fouled by Harris, began a series of cautions for visiting players which meant the referee’s interventions became the main talking point of the half. The second half improved as a footballing spectacle with the hosts initially on top before City began to pose greater threat going forward. The referee briefly took centre-stage again on 64 minutes, bizarrely booking Anthony Straker for time-wasting over a throw-in, but thankfully the closing stages of the game were all about Bristol City loanee Hinds. He had shot narrowly wide on 67 minutes after a weaving run then with ten minutes left a great piece of skill saw him arrow a volley toward the top corner only for Turner to match the quality with a stunning finger-tip save. Five minutes later he was at it again, twisting and turning in the box before hitting the outside of the post with Turner well-beaten this time. This was close as either side would come to netting and the remaining time was largely uneventful with a share of the points probably about right.