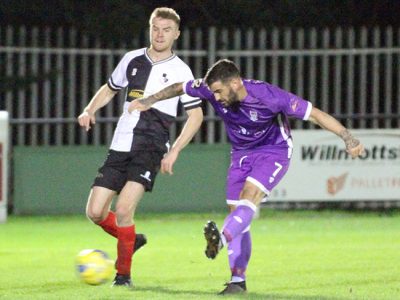 City were too strong for Western League Shepton Mallet AFC in the Somerset Premier Cup this evening, running out 5-1 winners at the Playing Fields. With City fielding a full first-team squad – including a welcome return to action for Frankie Artus and Dan Ball – the tie was effectively over by half-time as Adam Mann struck a hat-trick. On six minutes he slid home Andy Watkins low cross then in the 23rd minute he was set up by Dan Rooney to make it 2-0 with a well-placed shot. And eight minutes before the interval he headed home another accurate Watkins cross. Less than a minute later Peck pulled a goal back for the hosts with a great shot that gave Harvey Wiles-Richards no chance but there was no likelihood that this was the start of a comeback. Watkins saw an effort hit the bar before the only black mark of the evening for the Romans saw Joe Raynes limp off after he was caught by a nasty and unnecessary challenge from Allen. City maintained their focus though and on 71 minutes Tom Smith made it 4-1 with a left-footed shot from just inside the box. And Jordan Simpson completed the scoring with his first goal for the club four minutes from time, his shot from 20-yards taking a slight deflection before finding the corner of the net.