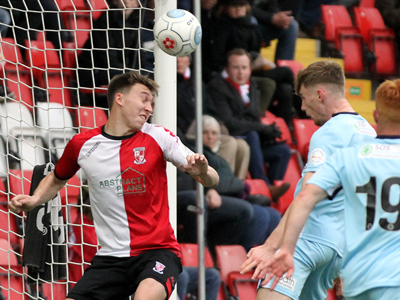 City bounced back from their disappointing FA Cup exit last weekend with an impressive 3-1 win over promotion rivals Woking at The Laithwaite Community Stadium this afternoon. All the goals came in a breathless first-half as City leap-frogged the Cards into third place in the Vanarama National League South table. It took just six minutes for City to open the scoring as Adam Mann produced a great acrobatic volley to net after Joe Raynes’ 30-yard shot had rebounded back off the bar. And on 22 minutes another one-two with the frame of the goal saw the Romans double their lead. This time Mann had the first effort, heading Frankie Artus’ cross against the bar, before Robbie Cundy had the considerably simpler task of nodding the ball into the goal from six yards out. City were in total control of the game but just past the half-hour mark Hodges got free down the left only to be tripped by Stearn allowing Kretzschmar to fire home from the penalty spot. Stearn redeemed himself seven minutes later when he was bundled over in the box by Makoma. Captain Anthony Straker restoring City’s two goal lead from 12-yards. The second half saw Woking enjoy more of the possession but they were limited to few sights of Ryan Clarke’s goal, one Kretzschmar shot hitting the outside of the post and another effort straight at the shotstopper. City also had several chances to extend their lead, Stearn shooting wide when well-placed and Tom Smith seeing a shot fly just the wrong side of the post, as they moved to within just three points of joint league leaders Welling United and Billericay Town. A gap they will hope to close further when they travel to face Truro City on Tuesday evening.