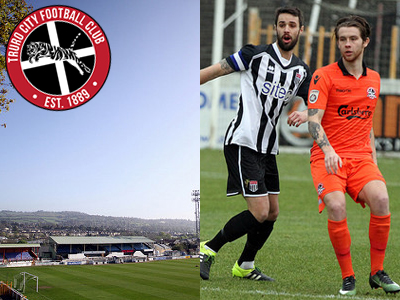 City take on high flying Truro City at Twerton Park this Saturday and welcome back two former players in Tyler Harvey and Noah Keats. Back in August, City travelled down to Cornwall on a Tuesday evening and recorded their first win of the season, with goals from Conor Lemonhaigh-Evans (penalty) and Frankie Artus securing a 2-1 victory.

Truro City are having a successful season, winning 12 of their 24 League fixtures, and amassing 42 points and a goal difference of plus 14. They currently sit in 4th position in the Vanarama National League South – nine points and seven places above Bath City, who have one game in hand. While City were not in action on New year’s Day, Truro City continued their good form with a 3-1 home victory over Poole Town.

Last season the Romans ran out 4-0 winners against Truro in the corresponding fixture, including a brace from Andy Watkins – let’s hope for more of the same!

We’ll see you there. Up the Romans!