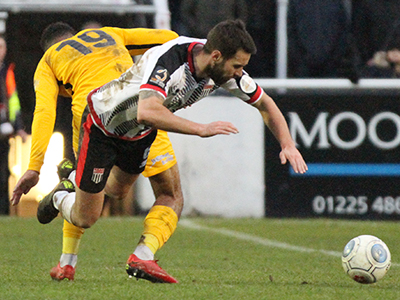 City produced a stunning late fightback to beat Vanarama National League South leaders Torquay United by three goals to two at a packed Twerton Park this afternoon. In front of just shy of 3500 supporters City took an early lead before the Gulls struck either side of the interval then missed a penalty. City levelled from the penalty spot before Ryan Brunt’s strike on 86 minutes won the game. The visitors came into the match on the back of ten successive league wins but it was City who struck first, Freddie Hinds latching onto Joe Raynes’ pass then lashing the ball into the net via the underside of the bar. Although they couldn’t fashion any further clear sights of goal as the half progressed City looked always comfortable in possession and dealt confidently with the Gulls attacking threat. However, with three minutes left in the half Torquay equalised when Hall rose highest to head a corner goalwards where it just avoided Raynes on the line. And on 65 minutes City were again undone from a corner kick, Reid getting the vital touch from close range. Nine minutes later the Devon side were handed the chance to extend their lead when debutant Leon Davies was adjudged to have tripped Andrews in the box, only for the same player to blaze the penalty high over the bar. It still looked as if Torquay would hold onto their advantage before an incredible final eight minutes. First Brunt was bundled over in the box by Hall and Anthony Straker calmly sent MacDonald the wrong way from the spot. The celebrations had barely died down when four minutes later Straker burst past two defenders to send in a cross that Brunt exquisitely lifted over the keeper and send Twerton Park wild. The Gulls threw everything they could at City after this, Ryan Clarke producing a stunning low save to keep out Davies’ shot then, with MacDonald up for a corner, former City academy striker Janneh somehow turned the ball over the bar from just a couple of yards out. This would be the last scare for City and moments later they could celebrate a victory that will live long in the memory.