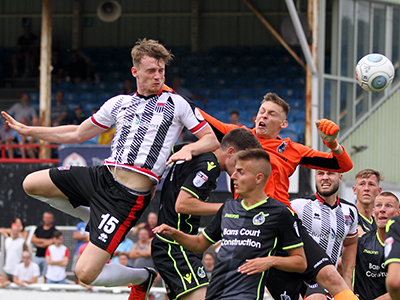 City struck six goals for the second time this pre-season as they swept aside a young Bristol Rovers side at Twerton Park this afternoon. The game also saw keeper Ryan Clarke save two penalties and all this after Rovers took a second minute lead. With City appealing in vain for offside Moore reached a through ball just ahead of Clarke to roll it into the empty net. City levelled on nine minutes when Ross Stearn’s cross was handled by Jones and they scored a pre-season penalty at the third time of asking, Sean Rigg sending O’Flaherty the wrong way from the spot. The hosts – resplendent in their new home kit – were now in control of the game and Andy Watkins put them ahead on 26 minutes, following up after O’Flaherty blocked Stearn’s shot. City did suffer a setback when Rigg was the victim of a dreadful change by Allen and after lengthy treatment he was replaced by Kevin Amankwaah. On 36 minutes City made it 3-1 when Joe Raynes crossed for Adam Mann to blast the ball into the roof of the net. Rovers improved after the break but it was City who increased their lead in the 57th minute, Robbie Cundy rising highest to head home a Matt Richards corner. Walker then fired over an open goal for the Pirates before they were awarded two penalties in the space of 11 minutes. Anthony Straker’s trip on Armstrong won the first only for Clarke to keep out the same player’s kick. Then Clarke brought down Ebbutt but redeemed himself, pushing away Moore’s weak effort. With 15 minutes left City made it 5-1, O’Flaherty blocking Richards’ shot only for John Mills to slot home the rebound, before Mann struck the pick of the afternoon’s goals with a well-struck 20-yard effort nine minutes from time.