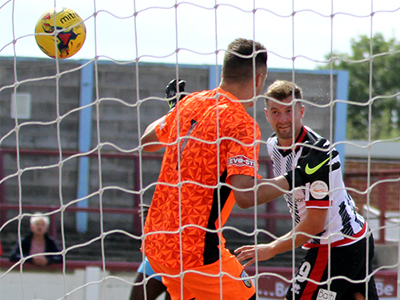 City completed an almost perfect pre-season campaign at Weymouth this afternoon with a seventh win in eight outings. And for a third time they came from a goal down to secure the victory. City had looked the more threatening side during the opening exchanges – Frankie Artus going the closest when his flicked header looped against the post – but the physical home side posed a danger on the break and on 16 minutes they took full advantage of one such counter-attack. Thompson broke forward and crossed for Goodship to skip round Ryan Clarke and roll the ball home. City levelled in the 27th minute, Ross Stearn collecting the ball 25-yards out before unleasing a stunning shot that flew past Seabright in the Terras goal. And seven minutes later they took the lead, Ryan Brunt crossing for John Mills to head into the roof of the net. He almost made it 3-1 shortly afterwards when he intercepted Buckley’s back-header but couldn’t quite lift his header over Seabright. In first-half stoppage-time a mistake by Anthony Straker allowed Baker to nip in only for Clarke to clearly push the ball away before the Weymouth player could take advantage. However, bizarrely the referee pointed to the penalty spot but justice was done when Clarke saved Goodship’s weak kick. The second half was a more cagey affair, with City passing the ball around confidently despite the bone-dry playing surface and strong wind blowing across the Bob Lucas Stadium. They did create a number of opening without testing Seabright and were nearly made to pay for this in the final minute. The referee capped his poor afternoon when he allowed a clear foul on Robbie Cundy to go unpunished but Weymouth couldn’t take advantage of a three-on-one opening and deny City the win.