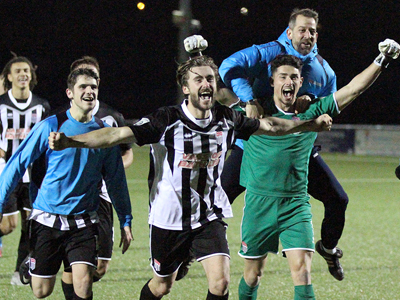 City finally overcame their spot-kick woes to beat Margate in a penalty shoot-out and progress to the FA Trophy 1st Round at Hartsdown Park this evening. After the kick-off was delayed due to a number of the home players getting caught up in traffic, the clock had just reached 11pm when George Rigg blasted home the winning penalty. The game had finished 2-2 after extra-time, with Martin’s low 29th minute shot that went straight through Luke Southwood opening the scoring. City levelled eight minutes after the restart through Jack Compton’s 20-yard free kick. And he produced an even sweeter strike just past the hour mark, lashing home from 30-yards to give City the lead. They couldn’t see the game out though and on 79 minutes Prescott’s shot through a crowded penalty box made it 2-2. City had to withstand late pressure from the Gate, with Southwood producing two stunning saves, two shots hitting the frame of the goal and a great block from Kevin Amankwaah. Into extra-time both sides saw efforts hit the bar and further chances come and go before it came down to the penalty shoot-out. Collin missed the first spot kick for the hosts and with Matt Richards, Frankie Artus, Amankwaah and Nat Jarvis all successful, Jack Batten stepped up to seal the victory. However, he saw his effort saved by Lee. But Southwood then saved Swift’s kick and this time Rigg made no mistake to spark joyous scenes from the City players and fans.

City will now travel to Hendon on Saturday 16 December (ko 3pm) for the 1st Round tie.