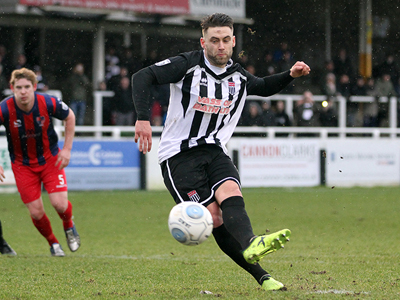 City bounced back from their disappointing defeat at Weston in the week to beat Hampton & Richmond Borough by two goals to nil at Twerton Park this afternoon. The visitors came into the game on the back of a remarkable 21-game unbeaten league run but a Frankie Artus header and Jack Compton penalty in the opening 25 minutes gave City an advantage they never looked like relinquishing. After an even opening City created the first good chance when Tom Smith’s shot was blocked by Beavers keeper Agboola but they only had to wait until the 17th minute to take the lead when Artus headed Compton’s free-kick into the net. And just eight minutes later they made it 2-0. A swift break forward saw Tom Smith slide the ball through to Nat Jarvis and he was tripped by Casey just inside the box. Compton confidently sent Agboola the wrong way from the spot. Jarvis had a great chance to made to three from Ross Stearn’s cross before Luke Southwood produced a superb double save to deny Taylor and Jolley. This ensured City went into the break will their two-goal advantage still intact. The second half saw Hampton look to go more direct but City’s backline withstood all they could throw at them. Southwood had to be alert again when a long ball forward from Baptiste got Kiernan in behind his defence. Even when Hampton got a sight of goal they found black and white clad bodies in the way and as the game entered its final quarter they began to run out of ideas. This allowed City to see the game out with no further scares and they nearly grabbed a third goal in the final minutes when Agboola had to keep out substitute Semenyo’s low shot.