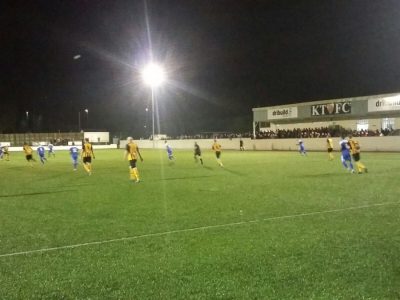 A rare Dan Ball goal midway through the second half was all that separated City and Keynsham Town in the Somerset Premier Cup this evening at Crown Field. He converted a 71st minute corner – City’s 13th of the match – at the near post in a game that the Roman’s dominated but, once again, they struggled to translate this into clear cut openings. The closest they came in the first half was when Jack Compton – back in the side after a month sidelined with illness and injury – saw his 22-yard free kick hit the post. He was increasingly looking City’s most likely route to a goal but just before the interval pulled up with a hamstring problem. The second half continued in the same fashion, with City knocking the ball around the 3G pitch and Keynsham happy to sit back and try to catch them on the break. Opi Edwards and Nat Jarvis had both blasted good chances high over the bar before Ball finally broke the deadlock. This finally forced the home side out and they had a great chance to level in the closing minutes when Box broke clear but he shot was well saved by Luke Southwood. This was City’s only real scare as, despite the referee somehow managing to find nearly seven minutes stoppage time, they saw the game out to secure a quarter-final place.