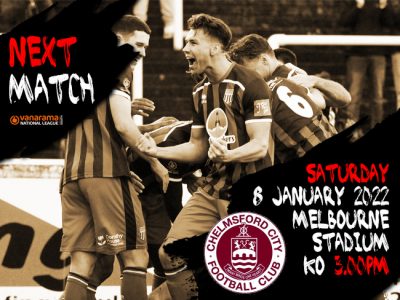 City make their first away trip of 2022 on Saturday when they travel to Essex to meet old friends and rivals Chelmsford City. They will be hoping to build on an excellent festive period when they completed the double over neighbours Chippenham Town.

The Clarets languish in 18th place in the league table with just 18 points from 17 matches having suffered a dismal first four months of the season with their only wins coming away from home, at Twerton and Hardenhuish Parks!

The eight league matches played so far at Melbourne Park have seen just the one win, three draws and four defeats with only nine goals scored.

However wins against Braintree and Concord immediately after Christmas have seen them open up a gap to the clubs below them, although several positive Covid cases in their squad prevented Chelmsford from playing the New Year return fixture with The Iron.

City had approached the Twerton meeting with The Clarets in late August in a confident mood having opened the season with two wins. However, goals either side of half time by Morgan and Dada were enough for the visitors despite a last-minute consolation from Cody Cooke.

Strikes from Donovan Wilson, Tommy Conway and an own goal provided City with a 4-3 win at Melbourne Park in the league match last season. It was no surprise that two of the home goals were scored by Charlie Sheringham, who at the time was on loan from Dartford and has now hit the net against us for four different clubs! He has since made the permanent move to Chelmsford and could well appear yet again on Saturday.

This will be the 44th visit by City to Chelmsford in the League with our record since 1938 standing at 10 wins, 7 draws and 26 defeats, the majority of those matches being played at the Clarets’ former city centre home at New Writtle Street.

Apart from last season’s win there, Melbourne Park has not been our most profitable venue in recent seasons with just one point being gained from the previous seven visits.

It would be fair to say that it is not the best ground in the league. Affectionately known as The Gulag by home supporters, it is in fact an athletics stadium and so the pitch is surrounded by a running track but there is usually a good atmosphere at the ground.

Although there are few attractions for the visitor in Essex’s county town and very few pubs in the vicinity of the ground, which is located in the city’s outskirts, the Clarets Bar at Melbourne Park is always welcoming and usually has a good range of beers and snacks on offer, including a full English breakfast from midday.

Information for visiting supporters and the opportunity to buy cheaper tickets in advance can be found on the Chelmsford website.

The 170 mile trip from Bath will take around 3.5 hours via the M4 and M25 while the train journey from Bath Spa will take around three hours and will involve changes at Paddington and Liverpool Street and then a two mile journey to the ground from Chelmsford station.