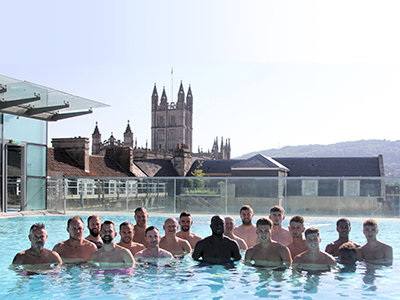 Bath City Football Club has treated its players to a weekend training camp, combined with a tour of Bath’s best and newest attractions.

Manager Jerry Gill and his Assistant, Jim Rollo, put the squad through their paces in a rigorous training session before rewarding them with a team-bonding trip around the city. The squad took in the mineral-rich waters of the Thermae Bath Spa, tried out the tables at the new Century Casino in Saw Close, and enjoyed a meal at Yum Yum Thai on Kingsmead Square. The team has made an unbeaten start to the season in their first three games, finding the back of the net nine times along the way, including goals for new signings Ryan Brunt and Adam Mann.

The last home fixture in the pre-season calendar will take place on Saturday 21st July as City take on former tenants Bristol Rovers. The “Kids for a Quid” offer will be running for the match, enabling under-16s to watch for just £1 – adult tickets will be £8 and a Family ticket £15.

Bath City kick-off the 2018-19 season, and their push for promotion, at home to Dartford on Saturday 4th August.